Every day, either on the news, in the papers, or at school, we are “assaulted” by information about different forms of discrimination.  Some parents and some teachers do certainly try to sensitize their children/students to the issues of discrimination towards people of different religion, gender, race, political creed, physical and/or mental aptitudes.  The very first article of the Universal Declaration of Human Rights points out that people should be treated with dignity.

All human beings are born free and equal in dignity and rights. They are endowed with reason and conscience and should act towards one another in a spirit of brotherhood.

It is a powerful article, followed by

Everyone is entitled to all the rights and freedoms set forth in this Declaration, without distinction of any kind, such as race, colour, sex, language, religion, political or other opinion, national or social origin, property, birth or other status. Furthermore, no distinction shall be made on the basis of the political, jurisdictional or international status of the country or territory to which a person belongs, whether it be independent, trust, non-self-governing or under any other limitation of sovereignty.

Yet it seems that so far we have not been able to guarantee these rights.  It hurts to know that it seems difficult for some people to deem it human and humane that Everyone has the right to life, liberty and security of person. (article 3)

What is your personal response to the first three articles of the Universal Declaration of Human Rights? How do you relate to them?  Why do you think it is so difficult for our specie to “delete” the word “discrimination” from the dictionary of the human language?  Is a world without discrimination sheer utopia? Why? (not)  Have you ever been discriminated against?  What for?  Have you ever discriminated someone?  Why?

Look at the following image.  What kind of discrimination does this social ad address? 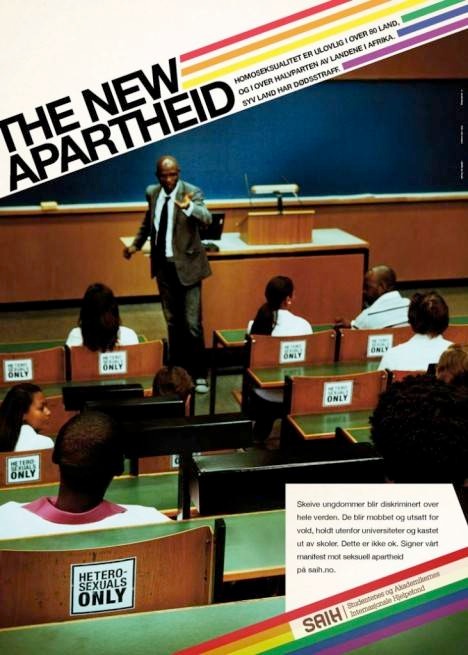 Do you think it is a powerful image to fight back discrimination against homosexuals?

Why (not)? If you were asked to devise an image and a catchy caption to fight back the problem of discrimination towards homosexuals, what would you come up with?

We are going to deal with the issue of homophobia, an issue that is not so widely dealt with in schools, as if mentioning matters of sexuality were still a taboo in our society.

Why is it so?  Why are there people who respond so ferociously to the word “homosexual”?  Why is the term “homosexual” so often abused?

We would really appreciate if you contributed to this post with all the respect and human dignity you are all capable of.

Read the definition of homophobia:

an extreme and irrational aversion to homosexuality and homosexual people

What do you find striking?  Would you add anything to this definition or do you find it exhaustive, to the point?

Certain words are uttered without thinking, without worrying about who you may be hurting by using them.  When some Italians emigrated to the USA without papers, they were pejoratively addressed as WAPS (without papers).

In any language there are words of abuse, why do we use them?

What does the use of these words reveal about the person who utters them?

To what extent should people be held responsible for the use of language?  Explain with some examples if possible.

Think of how often in your school you hear the word “finocchio” or “gay”.  We are not trying to convert people, but we believe that at school people should be taught to think, as a matter of fact our motto is  Thinkb4youspeak.