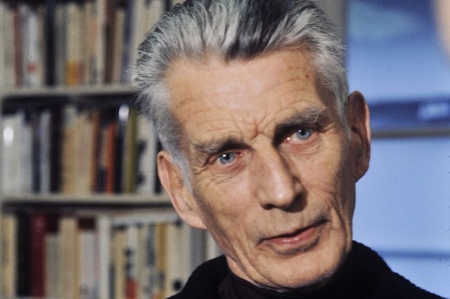 “We are all born mad. Some remain so.”
“Every word is like an unnecessary stain on silence and nothingness”

Just four days ago I read in the Guardian that “Echo Bones” a previously unpublished story by Samuel Beckett will go on sale in bookshops for the first time, 80 years after his publisher rejected it as a nightmare read that gave him “the jim-jams” (a fit of depression or nervousness). Call it Fate, but I was just about to start preparing my next lesson on him and I realized how up-to-date he still is. Therefore, it’s with great pleasure that I’m going to end our literature course with and Irish Nobel Prize writer I deeply admire and feel close to: Samuel Beckett. When I lived in Dublin in April 2006 I partook in the Festival celebrating his Centenary Birthday. Here’s his short biography.

In all textbooks  (read  page 415) his work is connected to the Theatre of the Absurd of the late 50’s, together with the Russian born Arthur Adamov (1907-80) and the Romanian born Eugène Ionesco (1912-94). Their work expressed the belief that human existence has no meaning or purpose and, therefore, all communication breaks down. Any logical construction and argument gives way to irrational and illogical speech and to its ultimate conclusion, silence. Absurd, therefore, means DEVOID OF PURPOSE:  I cannot help writing one of my favorite quotes from Beckett.

“There are only three certainties in life: that we were born, that we will die

and that we cannot keep silent”

You can now watch a short funny animation video on the History of the Theatre of the Absurd. Take down some notes.

If you enjoyed that quote you can find other quotes here. I also found a very appealing Pinterest page on Beckett with great photos and quotations: Explore Samuel Beckett.

As I was telling you in 2006 in Dublin  there was a great Festival celebrating his birth centenary with exhibitions ( a Magnum photography one I’ll never forget showing Bruce Davidson’s and Henri Cartier-Bresson’s portraits ) and stage shows (theatrical performances) every night in all Dublin’s theaters. In fact, I could attend the famous play Waiting for Godot at the Gate Theatre, directed by Walter Asmus starring Stephan Brennan, Barry Mc Govern, Johnny Murphy and Alan Stanford.Stunning, magic!!

Read the plot in your book page 482. Waiting for Godot, perhaps the most famous play by the brilliant and unique Samuel Beckett, follows a pair of men who divert themselves while waiting expectantly for someone named Godot to arrive. They claim he’s an acquaintance but, in fact, hardly know him, admitting that they would not recognise him were they to see him. To occupy the time they eat, sleep, converse, argue, sing, play games, exercise, swap hats, and contemplate suicide – anything “to hold the terrible silence at bay”. You can see an extract in the next video, the beginning of the play:

Estragon’s LAMENT, one of the most famous scenes.

To give you an idea of the greatness of this bilingual artist, I’m also pasting one of his beautiful poems in English of which you can find also the French version. As I wrote above, Beckett wrote both in English and French. I think it well recaps and summarizes the main themes of his production. Be ready to comment it in class.

What would I do without this world

The next video Breath is considered the shortest play in the world. (you’ll love that!) I’ve chosen it to make you understand how unique and avant-garde Beckett was and still is. Watch it and try to understand what it represents. Then continue reading.

Its length can be estimated from Beckett’s detailed instructions in the script to be about 25 seconds. It consists of the sound of “an instant of recorded vagitus” (a birth-cry), followed by an amplified recording of somebody slowly inhaling and exhaling accompanied by an increase and decrease in the intensity of the light. There is then a second identical cry, and the piece ends. No people are seen on stage, but Beckett states that it should be “littered with miscellaneous rubbish.” He did specify, however, that there were to be “no verticals”, the rubbish was to be “all scattered and lying.”

In the filmed version directed by artist Damien Hirst as part of the Beckett on Film project “the debris features hospital and medical waste” as well as cigarette butts shaped to form swastikas. Hirst says: “When I was asked to direct this film, I read the text and thought it was incredibly precise and strict. While preparing to shoot, I kept reading the text over and over and what focused me was Beckett’s direction ‘hold for about 5 seconds’. That was when I realized that Beckett had this massive sense of humour.

It’s right that sense of humour, sometimes so bitter and cynical but so very Irish that I find unequalled and that, the older I get and the more it makes me appreciate Beckett.

See you in class!