Hi! After reading and analyzing both G.Chaucer’s Wife of Bath & Patience Agbabi’s Wife of Bafa (from your textbook Performer Culture & Literature1, Zanichelli) I’d like you to create a modern version of “the wife” working in groups. Then you’ll recite it in front of the class. 🙂 Don’t be shy, it’s going to be fun!

First of all let’s see what a SLAM poem is. It’s type of poetry expressing a person’s personal story or struggle usually in an intensely emotional style. Very powerful, sincere, and moving.

Step one: in your group choose and agree on the profession, age, cultural background and nationality of your woman character.

Step three: Identify with her, put yourself in her shoes and write her slam.

If you need a rhyme you can use the RHYMING DICTIONARY:

5 TIPS for your poem:

Here’s an exemple of a serious & provocative Slam by a girl your age: What Guys Look for in Girls.

I cannot help ending this post with the trailer of a movie I watched many hers ago in 1998 when we still used videotapes – and found really inspiring: Slam.

HERE’S YOUR POEMS! I’m very proud of you all. You did a great performance this morning. None of you read the lines but had learnt the poem by heart. The words flew smoothly, you complied with the deadline and it was fun! 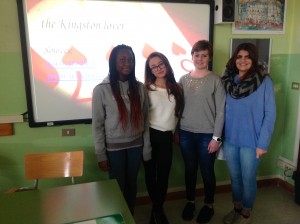 Hey brother what’s app?
Hey sister how’re doing?
I’m pretty fine here in the coastline
Chilling in Jamaica, in my beautiful land
Look at my face, i’m getting older and older
I’m trying a way to look younger each day
I’ll be 43 in a week
And i hope none of you have something to disagree
I’m going to celebrate with my fourth lover
He might not be my soulmate, but to me he’s been like a four leaf clover
Can’t say the same about his wife and his four daughters though
I wish he could let them go
Tomorrow i’m seeing Paul he’s my fifth and last
Finding him and making him fall for me was so fast
Because as you all know, seducing men is my third talent
The first two you’ll find them out on your own
I used to be a lawyer
I would work from 7 am till 11 pm everyday, struggling to win legal cases
I thought i was on the right way
But working too much made me sad and stressed
So i decided to have a bit of love in my life
I fired myself that same day
And since then i’ve never regretted my choice
Now i occasionally work in my sister’s salon
Braiding hair and entertaining clients with my interesting and hilarious stories
Therefore here AM i, searching for the perfect man
My first attempt was Mark, he used to be my boss
He was awesome and very kind
And we also had great time in bed
His fingers were as soft as cotton candy
Infact it was impossible to resist his magical touch
But despite these facts, our story didn’t last
I decided to leave him that sunday morning
After meeting his wife on his front door
Some say i have a crazy style
I only wear exotic hand made clothes
Made with the finest and newest red fabric there is
If you’re interested just let me know
I won’t hesitate and make you an allowance
But only if you offer me the best dinner ever
I’ll let you know from which foreign land they are from
My men call me in different ways
For their wives i’m just a calamity
But if you ever decide to come and look for me in my area
I am well known as the Kingston lover. 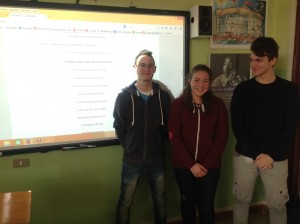 A wealthy woman from close to Burnley town

For her skill she’d deserve a crown

Barbara Barlow was her name

And she was well known for her fame.

She used to weave the silk

For nobles and people of that ilk

In her trade was she so killed

That quickly she became rich.

No husbands she had

And that was very bad

She worked every hour and every day

To make her feelings fly away.

A loads of men fell into her temptation

Therefore so high was her attraction

This woman was so good in bed

Fiery was her body after a night so red.

She had a birthmark on her shoulder

It had a shape of a flower

That every man used to worship. 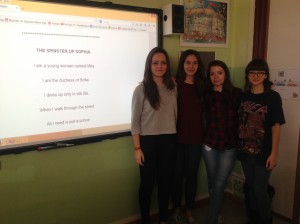 THE SPINSTER OF SOPHIA

I am a young woman named Mila

I am the duchess of Sofia

I dress up only in silk lila.

When I walk through the street

All I need is just a prince

And you realize I’m lonely inside.

For many men I cried

Many men thought that I would kiss

Just for money and not for peace.

You may ask “why do you wait so much

For a man who you may never catch?”

The answer is love,

I never worked a day

If i want something I don’t even have to pay.

But that’s not real happiness

Because only grows my emptiness.

According to my friends

I just want the smartest guy

Handsome and who never says goodbye.

Even though I know

what I may need and want

I can’t be sure I’ll keep my man til marriage.

An ordinary living is not

for my person good, I forgot

what are women meant to do

as they’re born to cook and to sew.

One day all my dreams will come true

And maybe my man will be exactly you.

and this is my slam. 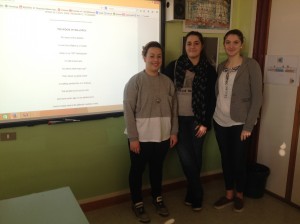 THE WIDOW OF MALLORCA

My name is Mrs Adelina

I come from Mallorca, in Spain,

today is my 100th birthdayand

You know what many say?

That I show so great a bent

in making sandwiches in a Subway

that people buy for just a cent.

Just some years ago, in my adolescence,

I met so many men in the different countries I went,

but just a few put a ring in my hands.

but do you know which was the greatest time I spent?

One day I went to the Billionaire,

there I fell in love with a businessman

but only then I discovered he was a millionaire

and so I became an important woman.

But unfortunately he died

After a long time I found again my control.

So many wanted me that I couldn’t decide

but only four of them played in my life an important role.

They are the richest men that I know

but they aren’t enough rich to make my heart beat,

so I still consider myself as the businessman’s widow.

After all these stories,

because my first love will be forever in my memories. 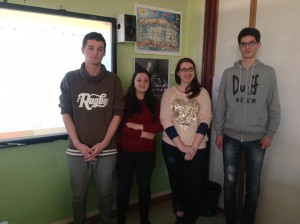 The Wife of Liverpool’

“A worthy woman from Liverpool,
was she kind indeed,
she never acted mean or cruel
and granted every need.

Maggie Mae was her name,
Lime Street her runway,
there she walked with no shame
working every day.

Many were the men who fell
for her velvet touch,
no where could you ever go
asking for that much.

Was she the kind of woman one could ever marry?
Plentiful the presence that she had to carry.
Her name was known, her acquaintance sought,
there was not a rival that she ever fought.

This lady used to glorify the many sailor’s tales
her name was the cause of the happy sales.
Far and wide, high and low, she was surely known
the youth would sigh the lady that none could ever own.

But the judge he guilty found her
of robbing the homeward bounder,
and soonly she was taken
as the dockside all was shaken

No more will Maggie Mae be marchin’ thru’ Lime Street.”