From Voices of America 10 January 2016 on Mass Shootings in the U.S.A. “An average of one mass shooting happened every day in the U.S. in 2015, the New York Times reported. The deadliest mass shooting in 2015 happened on December 2 in San Bernardino, California. Syed Rizwa 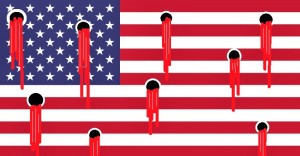 n Farook and his wife, Tashfeen Malik, shot and killed 14 people and injured 22 others.
The attack took place at a holiday party for a local government agency. Farook worked at the agency. Police killed both Farook and Malik in a shootout.The U.S. Federal Bureau of Investigations said both Farook and Malik had been radicalized. The FBI considered the shooting an act of terrorism.

Other major mass shootings took place in a South Carolina church, a community college in Oregon, and a health care facility in Colorado.

On June 17, an armed 21-year-old man walked into an African-American church in Charleston, South Carolina, and killed nine people, including the pastor. Police say the gunman told them he hoped the attack would lead to a “race war” in America.
On October 1, a 26-year-old man shot and killed nine people at Umpqua Community College in Oregon. He killed himself as police arrived. Friends and neighbors said the man collected firearms and liked to wear military clothing.

On November 27, 57-year-old Robert Dear killed three people during a shootout in Colorado Springs, Colorado. Nine other people were wounded. The shooting happened at a Planned Parenthood clinic. Planned Parenthood offers family planning services, including abortions.Dear later pleaded guilty to the shootings. In court, he called himself a “warrior for babies.”

They called for changes to current laws that permit people to purchase guns without a background check. They also want to bar people on the U.S. government’s “No Fly List” from buying guns. The list contains names of people suspected of having connections to terrorist groups.”If you’re too dangerous to board a plane, you’re too dangerous to buy a gun,” said Democratic Senator Dianne Feinstein of California. ”

Now Obama pledged for new gun rules and the article in the New York Times Guns Are Our Shared Responsibility we are going to read in class was written by him 2 days ago. Let’s read & listen to the article from VOA and watch the video of an emotional Obama.

Here you can find all DATA regarding gun violence in the USA: Gun Violence Archive. Here you can compare it to the rest of the world in a visual way.

Some people even believe that teachers should come to school armed in order to protect their pupils. How would that “me” make you feel?

Before devoting our next session to the movie and the discussion I’d like you to read a CNNiReport I wrote last year following a shooting at Costal Carolina University. I went to visit that University and it’s pretty close to where my son was studying so I couldn’t help feeling emotionally involved.